Long way to the 3DImage

In the middle of the nineties Trident Microsystems was very well known maker of 2d accelerators. Ever since 1992 launch of their ubiquitous TVGA8900 they had a reputation of rather slow but cheap graphics. With advent of PC 3d market the company stepped up and designed their first 3d architecture as early as of 1995. The T3D2000 chip integrated Tridents already established true color 2d and video acceleration with 64 bit 3d rasterization and z-buffering. It was supposed to be performance flagship. Instead of games Trident was aiming at CAD and engineering workstations where texturing was not yet necessary. T3D2000 supported up to 16 MB of Micron's WRAM which could teleport Trident into high end. But it seems no board maker picked the chip, despite good relations with several OEMs which could use such product. What happened? Was it broken, did it suck too much, was too expensive at $60 or just nobody cared? Anyway Trident continued improving T3D architecture and reduce costs through higher integration.

1996 came and 3d was getting serious. That summer Trident, not to miss the ride, prepared $37 T3D9692 chip with universal memory architecture. It was a complete solution ready for Direct3D with perspective-correct texture mapping and filtering. To get closer to software developers Trident established its "Third Dimension" program that provided them with evaluation T3D2000 boards, documentation and tools for porting to the technology. Which cards used the T3D9692? Any ProVidia 9692 out there? I don't know any. But Trident was on a roll and next quarter reveaed yet another 3d enabled cores- ProVidia9695 for PC and power-gated Cyber9395 for notebooks. These added TV-Out, optional 24 bit z-buffer, used cheap EDO memory and had a setup engine processing 500+k triangles per second. Did the board manufacturers finally jump after Trident's 3D? I still cannot find any products implementing them despite announced contracts. Thus Trident later referred to Cyber9397 (based on the 975) as their first 3d mobile chip. After acquisition of Omega, Trident could manufacture their own PCMCIA products and become important player in mobile graphics. Sales of 2D discrete products were still rising rapidly. But it took fourth attempt to enter the more promising 3D market- the infamous 3DImage 975. 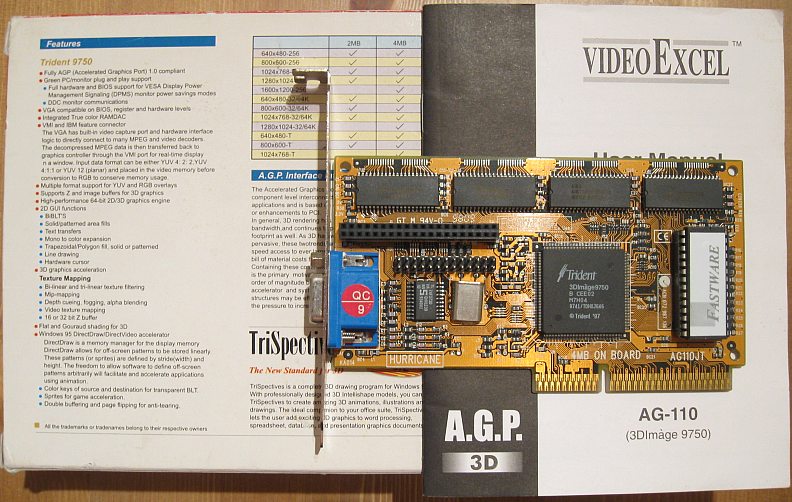 Not exactly a card collectors dream about getting with the whole package.

Here is causal board with 4MB of 60ns EDO memory. Those are clocked at 55 MHz and have no overclocking headroom at all. 3D Image supports SGRAM with block writes up to 100 MHz, but lets see how slow this variation can get. With price below $30 the 975 chip was often found on boards that cheap. The card is for AGP bus, Trident made sure their chips will be featured on AGP from day one of the bus, but only electrically compatible. Last driver I found is version 5423 compatible with DirectX6 and it does not offer any fancy control panels.

The 3DImage 975 erased all previous efforts and Trident itself refers to it as their first 3D accelerator. It entered the market in spring 1997, rather late compared with announcements. The 975 relieves the CPU of setup tasks with its own setup engine offering 1.4 million-polygon/sec transformations with triangle strips and back face culling. Such potent triangle setup engine should have been main differentiator of 3DImage in the entry level market. It is realized by stackable DSP-based circuit, the 975 integrates four of them. The whole pipeline should be able to sustain 1.2 megapolygons per second and reach peak fillrate of 66 megapixels per second. Those are very nice numbers for a budget chip, no wonder Trident gave it fancy name- rCADE3D engine. But somehow they forgot to mention those numbers came from 8 bit colors, in standard 16 bit the performance is halved. It should also support subpixel positioning, which corrects errors that cause a vibrating effect in a texture's surface of a moving object. As you will see the 9750 is very good in enhancing such errors. The first warning sign is low color precision of Gouraud shading without option of dithering. In blending stages substractive operation is missing, taking down further image quality. Only 16-bit Z and image buffers are supported. 2D part is rich and more expensive 975DVD revision includes THAMA- Trident hardware-assisted MPEG-2/AC-3 architecture. I could not find any card with 975DVD, from what I gathered the DVD playback was too bad to ship. But there are cards with Cyber 9397DVD chip intended for laptops.

Trident did not deliver anything for OpenGL, but the 9750 is quite compatible with wrappers of S3 and Chromatic. Both exhibit about the same performance, but of course specific texture artifacts appears and non pure Quake game like Sin is corrupted way too much. But at least I got more results even if the screenshot function does not work. 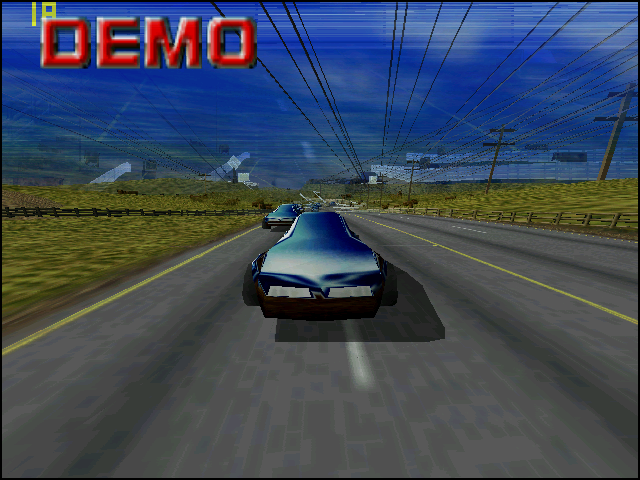 9750 arrived from the dreamland of broken graphics. Visit whole gallery.

There are only a few total losses in Direct3d. Expendable crashes to desktop, Ultimate Race Pro is excluded because of too much corruption, Warbirds result is missing because 9750 renders only cockpit. Unreal at default setting attacks your eyes with vibrant noise colored patterns replacing original textures because of broken mip-mapping. Turning it off sacrifices sky, but at least lightning is fixed, still many artifacts remains though. Given how slow it runs I think it is safe to include the result. 9750 also displays usual blending incapabilities of early 3d accelerators, but at least not so frequently like Virge for example. Yet in the end Trident looses in image quality big time. While compatibility of 9750 is not bad, the main problem lies in perspective problem and broken texturing poisoning all games. Allow me to demonstrate on those screenshots from Lands of Lore 2. 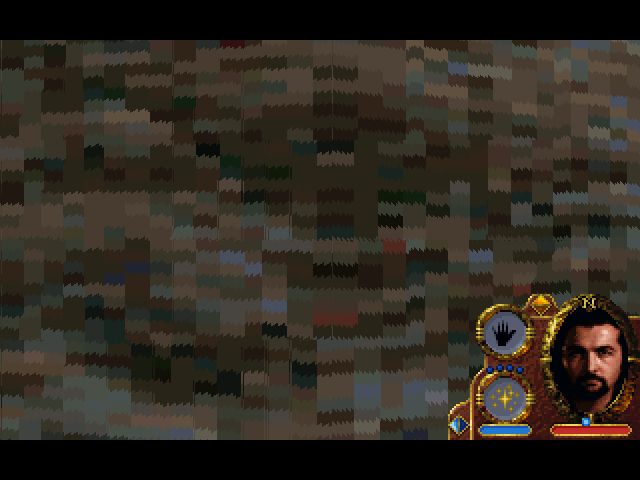 This is what Trident calls second generation 3d accelerator.

Take a look at those point sampled texels, drawing a straight line is a tough job for this texturing engine. Looks like 9750 is broken inside and users are left with crude approximations. The chip hardly determines which pixel of texture goes to which pixel on screen. Simple flat surface is broken into random planes floating along as the camera moves. If this is indication what earlier 3d designs of Trident were doing, then it is clear why they did not make it to the market. But it gets worse, click on the image to see same wall bilineary filtered. Trident supports bilinear and half speed trilinear texture filter, but it works only when it feels like it and causes heavier artifacts. In LOL2 you can just escape to menu and then get back in the game to see bilinear filter enabled. Make a few turns and 9750 gives up on filtering again. And this happens in more games. Lightmapping on 3DImage is a disastrous display of texture Z-fighting.

Trident took their time before they entered 3D for real, but what a failure it is. Visually 3DImage 975 is in the territory of shame, between the chaos of AT3D and immature but working graphics chips of 1997. Normally it would be disqualified from any comparison, but I am attracted to failures and went exactly after such experience with this project. Broken 3d perspective, texturing, missing blending modes, buggy mip mapping and low performance - Trident could have wait some more, but thanks for the ride. I put this particular card equipped with 55 MHz EDO against Virge /DX with same memory. 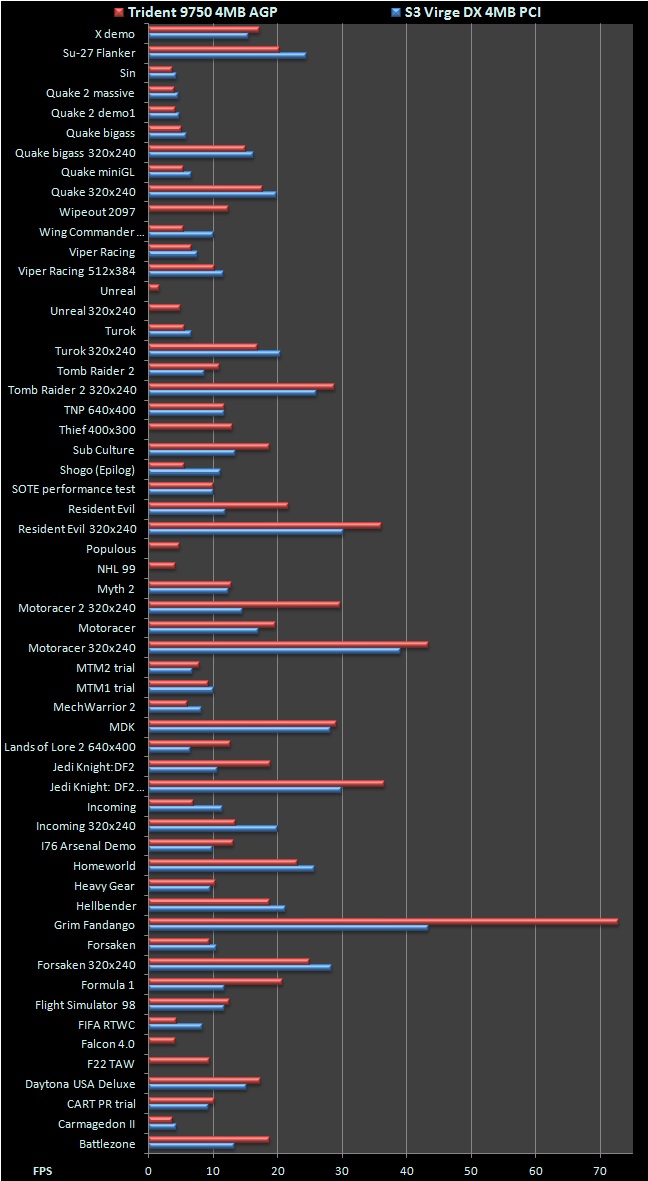 9750 has a slight lead in average fps and double so in minimal framerates, but due to its enormous bugs I hesitate to place it above the Virge /DX.

Following product 3DImage 985 should be significantly better, so I could not wait, shell out $20 to get a nice one and put it through. continue to 9850 review